The Price Behavior Explorer illustrates how the market behaved while you were in a position.

You can see several important metrics:

Note: The random control line helps you understand if your strategy is the result of an otherwise rising market or the strategy itself. It works by generating random points on the same price chart and tracking their average price behavior using the same math as your strategy.

The Performance Chart provides a bird's eye view of backtesting results over time and compares the strategy with buy-and-hold results. 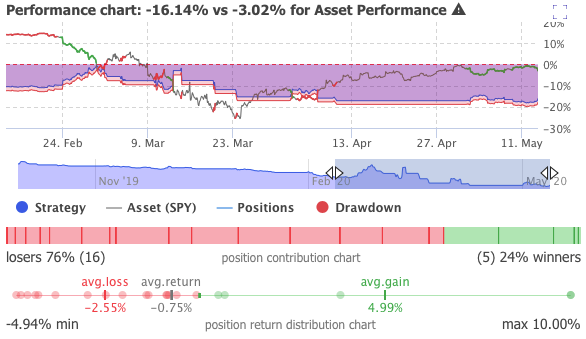 The Position Contribution Chart shows the percentage of winners versus losers along with the count.

Each strip (red and green) has a number of short vertical lines that indicate the impact of a single position — the further the line stands from a previous one, the higher was the impact of this trade. The chart gives you a sense of consistency of your positions’ outcomes.

For example, if you had only three losing trades, for -1%, -1%, and -3% respectively, then you would have a chart that looks like this:

In this example, you might come away with the following insights:

The interpretation of this chart could be: Your strategy was consistent at losing money, and was spiky when it comes to making money.

The Position Return Distribution Chart shows the distribution of returns to help you see the average loss, average return and average gain, as well as where different trades fell along the spectrum (e.g. to spot outliers).

For example, suppose that your strategy generates the following chart:

Next Article in Topic

Not finding what you're looking for? Contact Us Directly